Caribbean Through a Lens

Caribbean Islands - The Caribbean Through a Lens 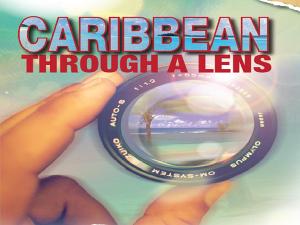 We have material for presentations, to display and products to purchase.  The presentation includes a talk about  different Caribbean Islands and informs of Caribbean people from many different traditions, ethnicities and cultures from Europe, Africa and Asia.   It recognises the wide ranges of languages spoken in the Caribbean includes Spanish, English, French Dutch; and religion includes Protestants, Hindus, Muslims and Roman Catholics.   There are a selection of images from numerous Caribbean Islands from 1860’s.

The presentation also includes an introduction to the Family search site that can be used to search family from the Caribbean.


Caribbean Through a Lens activity sheet

'Caribbean Through a Lens' displays and sessions held in the community 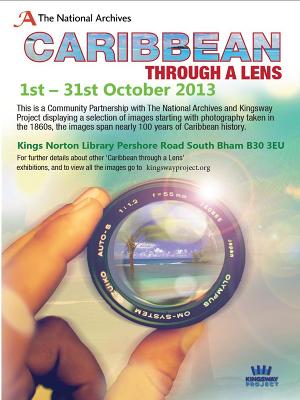 'Caribbean through a Lens' explored in partnership with the National Archives 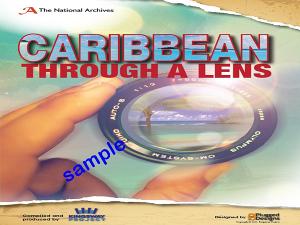 Caribbean through a lens - panels

Caribbean through a lens panels


This is a fantastic opportunity to see pictures of Caribbean Islands from 1860.  The booklet comprises of a small number of pictures, a much wider selection is on the National Archive website. 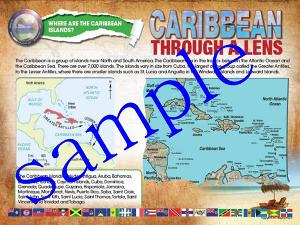 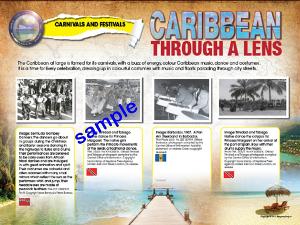 Caribbean through a lens - explored!

The National Archives has been working with community groups to share and explore their collection of Caribbean images.


The Caribbean Through a Lens (CTAL) project, part of the wider 'World through a Lens' project, was designed to engage with new audiences nationally - in particular the Caribbean community, using The National Archives collections of Caribbean images from the Ministry of Information (INF 10) and Foreign and Commonwealth Office (CO 1069). A dedicated Community Projects Officer was recruited to design and deliver the project.

Learning from an earlier project, 'Africa through a lens', which was designed to engage people online and focused heavily on digital engagement, The National Archives digitised images from these Caribbean collections allowing the entire range to become accessible via Flickr.

Evaluation demonstrated that not all CTAL audiences were exclusively of Caribbean heritage, thereby demonstrating the cross-intercultural appeal of these records from wider audiences.

Delivering 'Caribbean Through a Lens'
Developing partnerships
The CTAL project team sought to create opportunities for shared decision making and localised consultation with communities and organisations directly to deliver The National Archives' community co-productions. CTAL was designed to work in parallel with community and heritage organisations, including creative practitioners who could engage new audiences with archives. The initial press and communications plan developed by the Community Project Officer was to drive publicity more locally and regionally, as and when projects developed.

With ten years of outreach activity at The National Archives, the project team was able to use existing outreach community contacts and supplemented these with further ideas from other parts of the organisation. Community groups and heritage partners were invited to participate and engage with the collection of photographs before the images were 'live' on Flickr. The Community Projects Officer was responsible for formalising new and existing partnerships, with an equal spread of activity across London and regional cities. Projects were owned by the CTAL partners. A small amount of funding was allocated to enable reproduction or support interpretation of these images in order to encourage community engagement. Partner organisations responded positively to this, seeing opportunities to link in and enhance existing projects or programmes, or to undertake a new piece of work at a time when finances are in great shortage.

Selecting and using the images
Through discussions with partner groups, the Community Projects Officer prepared a more tailored selection of material, taking into account local needs and interests of specific target audiences. Downloading images onto an iPad when meeting with partner groups ensured that community organisations with little or no internet access could still access the material and make more informed decisions for project selection and ideas generation.

Some images used in the project had been digitised previously as a marketing initiative, but early on the team identified that these images from a Colonial Office Collection (CO 1069) needed to be supplemented by further material to enhance certain areas such as Jamaica and Trinidad where the colonial office collection was sparse. The project team anticipated much interest from the Jamaican and Trinidadian communities, as both would be celebrating their 50th anniversary of Independence.

The CTAL project therefore oversaw the digitisation of the entire INF 10 series British Empire Collection of Photographs with the Caribbean images becoming available on Flickr.

Outcomes of the projectLaunch of CTAL Flickr content in August 2012 for permanent access to coincide with Jamaica and Trinidad Independence Days as part of the wider 'World Through a Lens' series. Over the next 10 days, remaining country files were then alphabetically uploaded onto Flickr for community use
Financial, project management and delivery support for 34 projects with charitable organisations and their work including:
London Borough of Waltham Forest Libraries - From the Lens to a Lyric (38,048 visitors from October 2012 - Jan 2013)
High Commission for The Republic of Trinidad and Tobago - 'Nationals' meeting attended by 70 with extensive media coverage across Caribbean press and Social Media (T&T Facebook page)
Hackney Museum - Jamaica and Trinidad and Tobago 'Independence' themed Exhibition - 1,000 visitors including school visits (Oct-Feb 2013)
Cuming Museum (Southwark) - Permanent CTAL Exhibition, film and 'Dominoes game themed on local responses to the Caribbean collections
Kingsway Project - 1000 Educational Booklets designed for local libraries, schools and community use, featuring the Caribbean images  and travelling exhibition across Birmingham & Solihull
Abela Culture - You Tube films, Inter-generational performance/Workshops and Blog with over 50,000 visitors to date.
65,000 viewed legacy themed 'Independence' exhibitions in Waltham Forest and Hackney Museum alone. At least 50,000 have visited flickr website to view or use images.
A minimum of 3,500 people have attended workshops to date, encouraging a personal connection with the images
Images developed for educational resources, examples being Nottingham New Arts Exchange, Hackney Museum and Kingsway Project
Caribbean through a lens web page showcasing work of community projects
An exhibition available for loan in community setting which showcases the project
Articles in The Ephemerist, Archive Sector Newsletter and Society for Caribbean Studies

Challenges and opportunities
Using digitised images
A user-friendly format for the collation and cataloguing of images prior to community project development would have been useful. Many of the CO 1069 images were not catalogued at piece level so general descriptions were unhelpful. A benefit of using images from INF 10 British Empire Collection of Photographs was that these were already fully catalogued
Some of the images were scanned at too low a resolution to be useful for exhibition and formats other than online
Time consuming to repackage or scan images
Digital reach needs to be tailored to meet the needs of specific audiences. Flickr is challenging for certain age groups. Using social media and QR codes with additional context for the records could be tested for similar projects in the future
Managing demand
The majority of partners planned projects around Black History Month, which placed a strain on the resources of the team
This was more difficult to plan than other projects because the flexible approach allowed communities to create their own outputs. This meant it was difficult to predict what was required at the outset
Engaging with audiences using digitised images
An estimated 90% of people wanted to engage with the images offline; digital by default should not be the only option. Needing a Flickr account to add comments or upload content can be barrier to engagement and many people prefer to view and discuss images in a more social context. This was consistently evident in projects that allowed for freedom to handle photographic reproductions, e.g. the High Commission for Trinidad and Tobago. Projects run by London Borough of Waltham Forest Libraries and Croydon Supplementary Education Project were the only projects to feature a dedicated Flickr workshop as part of their programme. Designed to engage new users with the Caribbean collection on Flickr, for 'Get Online Week', the workshops pitched across several local libraries, but received very little audience engagement
Administrative processes
Invoice process proved to be particularly challenging for smaller grass-roots organisations
Large size of photographic files created problems sending and receiving files electronically
Developing new partnerships and raising the profile of The National Archives with new audiences
Promoting The National Archives and its collections within community settings and across the sector. This helped to promote the services of The National Archives in general, as well as the project. For example, The High Commission for Trinidad and Tobago, wished to use a sample of the Trinidadian images (selected by them) as part of their regular monthly 'Nationals' meetings. The Outreach team designed and facilitated a workshop for the meeting, reproducing Trinidadian images and Postcards (in-house) which were given to attendees at the meeting event and the High Commission for Trinidad and Tobago used their existing press and marketing tools to publicise the event and include one of the images on their London Facebook page. This generated press coverage across Caribbean publications both online and print, with the Trinidadian file now the third most viewed in the The National Archives' Flickr Caribbean collection.
Training
Staff were able to develop new skills such as media training to promote the project
What went well? What didn't go quite as well?
Positive impact across the sector has resulted in increased opportunities for partnership working and accessing funding streams
Postcards of the images provided a useful and popular way of getting people to engage with the collection
The huge appeal of the photographic images, in terms of cultural heritage, social and educational levels. The demand to use the images has grown extensively and will continue well beyond the initial scope of the CTAL project
Community events were generally well attended with positive feedback and comments on the photographic images. People were pleased to see the images and felt a great sense of pride and nostalgia towards the Caribbean. This was clearly evident in Oral History and reminiscent focused activity
Partners using Social Media to showcase and publicise their projects, examples include St Mungo's, Waltham Forest Libraries and T&T High Commission's Facebook page
Flickr is not an easy format to use for elderly groups or those with little or no Internet access. There were also challenges in counting visitor numbers, inputting feedback gathered from events and monitoring and evaluating Flickr content
Much stronger, focused and target support could have driven social media and press coverage with regional project and the variety of sectors covered by CTAL, for example young people, elderly, homeless, women in prison/hostels/domestic abuse and rehabilitation, education, libraries. Community engagement programmes require equal support from Marketing and Press to promote awareness of the projects and support overall strategic aims
Development of the post of dedicated Community Project Officer to support the project was very successful
Developing the project in the future
The dedicated web page will continue to be developed with additional content
Continued use and promotion of the Flickr images online
Loan of the CTAL and Memories from the Islands exhibitions
Development of online workshops, podcasts
Community-led projects such as Education booklet and Kingsway's booklet and continued use of images in a community setting
For further information see our Caribbean through a lens page. 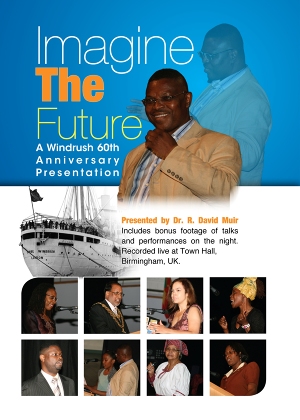 A new DVD was released by Kingsway Project in 2013.  It is a recording of a Windrush 60th Anniversary event held on 22 June 2008 at Town Hall, Birmingham and provides a very inspirational viewing experience.  Manufactured and distributed through a US company, the DVD retails in dollars at $19.95 (£12.95) and is available for easy purchase in the UK or anywhere in the world - so please do inform friends abroad too!  View back cover

Order it now from our order page www.createspace.com/373696

Alternatively, order it through Amazon.com